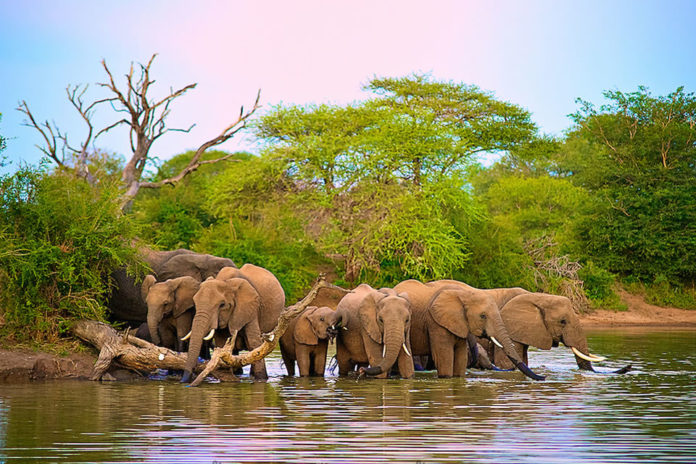 Can’t get Blue Monday out of your head? Then let TripAfrica fill your grey matter with a handful of blue things that really aren’t that ‘blue’ at all. Shiny, jewels of happiness to remind you than dull January is very nearly over, the daffodils will soon be bursting through and St Valentines Day is just around the corner! Spring is very nearly here, but before it’s sprung, here’s our handful of happiness:

1, Blue Wildebeest  – The great migration is in full swing in the southern Serengeti right NOW, and, taking advantage of the lush green grasses, the migrant wildebeest population are beginning to calve, littering the plains with lots of little, lanky bundles of joy, ready to gambol their way back north with a trot, skip and a jump. Ahhhhhh.

2, Blue Crane – The National Bird of South Africa, the blue crane is elegant, smooth, refined and since breeding season is between Oct & March, they are most likely having a wondrous & welcoming January. Pairs form at the beginning of the breeding season by selecting one another through a serious of complicated dance moves & flinging objects at one another… Once the flinging and winging has ceased they care for their eggs throughout incubation, welcoming their waterproof little fluff balls just 30 days later… Bluetiful.

3, Blue Duiker – One of the continents smallest antelopes, the diminutive blue duiker is found throughout Central and Southern Africa. These teeny forest dwellers, breed throughout the year and rarely leave the sanctity of the deeper bush. Those lucky enough to catch a glimpse may well be rewarded with a swift ‘dive’ into the undergrowth followed by a whistle & ‘sneeze’ of indignation!

And finally…. Balls to Blue Monday – The widely abundant Vervet monkey, a balcony diver, veranda marauder, kitchen invader and general, but jovially enjoyable, nuisance, has but one thing to say to the Winter Blues… And they won’t be shy about it either!

admin - January 25, 2022 0
Bamenda is a lovely city in the northwestern part of Cameroon and offers greatest tour pleasures. Also known as Mankon and Abakwas , this...