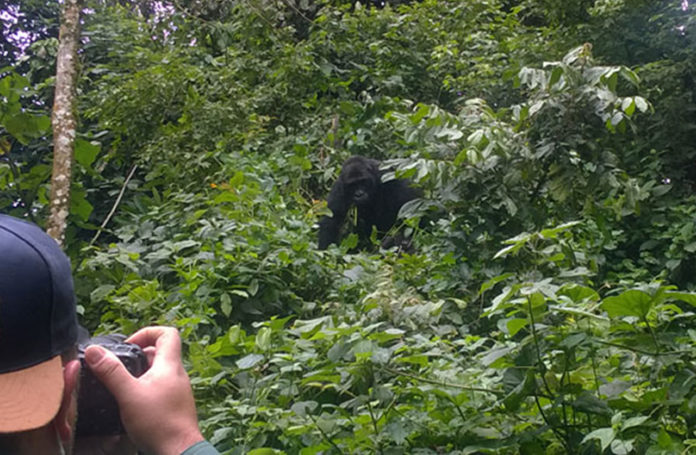 There are only two populations of mountain gorillas left in the world. Mountain gorillas are found on two separate locations, the first one lives in the Virunga volcanic mountains of Central Africa, with groups scattered between Uganda, Rwanda, and the Democratic Republic of the Congo. The second population lives deep in the thick Bwindi Impenetrable Forest National Park. As of September 2016, the estimated number of mountain gorillas remaining is about 880.

The distribution of mountain gorillas is entirely within national parks, but despite their protected status, all three countries inhabit similar rugged terrain and have similar habits. Individual mountain gorilla groups vary in their accessibility. The regulations and quality of local gorilla guides and trackers is similar in Rwanda and Uganda.

It’s important to know what you’re getting into before setting out for budget gorilla trek in Africa. The hike through the forest is challenging and tough-going (your guides will often have to machete a path through the ferns that clog the undergrowth), but it’s within reach for anyone with a reasonable level of fitness. You will get muddy though and sweaty. Beneath the forest canopy, the humidity is very high, and it’s a good idea to bring a canteen of fresh water to hydrate as you go.

Uganda has two places where these Mountain Gorillas may be seen, one is Mgahinga Gorilla Park; a stunning park and a component of the Virunga chain of towering volcanoes that extend into the DRC and Rwanda, and then in Bwindi Impenetrable Forest National Park. Bwindi forest is a UNESCO World Heritage Site and has more than half of the rare estimated population of 480 mountain gorillas. The park is situated in the south western park of Uganda on the edge of the Albertine Rift montane forests. Trekking mountain gorillas in Uganda is a truly unforgettable experience that offers a great privilege for the rest of your lifetime. No safari to Uganda would be complete without experiencing this particular wonder at least once.

The must see life experience is the first single hour you can spend in the wild with our so close related gorillas. As the venture is starting with a good hike to the last know where about of the family, it takes you through beautiful scenery. The clear-cutting line of trees and farmland shows so clearly the pressure of humans on the wildlife.

Back in the nature, in Bwindi you will have looked like over a century ago. Marvelous and impressive you have to find the gorillas here deep in the jungle with some less restraining hike, they are just across the farmland and showing their gentle nature close by. You can take videos and pictures of them playing, sleeping, swinging from trees, and many others, the guides visit the gorillas every day, for over many years before they may host the guest from all over the world. The relatively high price to pay for the 1 hour visit is worthy every drive and some is used to protect the species and land for future generations.

In Rwanda, gorilla trekking takes places in Volcanoes National Park lying north western Rwanda bordering Virunga national park and Mgahinga gorilla national park. Virunga National Park is known for its haven for the rare and endangered mountain gorillas and golden monkeys and the rich mosaic of montane ecosystems, which embrace evergreen and bamboo forest. The park is home to five of eight volcanoes of the Virunga Mountains including Karisimbi, Bisoke, Muhabura, Gahinga and Sabyinyo and span 160km covered in rain forest and bamboo.

The park was the base for the zoologist Dian Fossey.  Of all attractions in Rwanda, the one that really draws people to visit Volcanoes National Park, are the rare mountain gorillas. A thrilling trek through the cultivated foothills of the Virunga’s offers stirring views in all directions entering the national park with armed guides and trekkers leading you in the mysterious intimacy of the rain forest jungle alive with the calls of colourful birds and hooting of the rare golden monkeys.

In Democratic Republic of Congo, gorilla trekking takes place in Virunga National Park. Trekking mountain gorillas on foot starts early in the morning and after border formalities you are transferred to a ranger’s station where the trek commences. Your rangers will lead you through the cultivated lands and then into the dense rain forest and as close as is allowed to a gorilla family. The rangers monitor the gorillas on a daily basis and have a fairly good idea of where they are. However, they are free roaming animals, and their sighting cannot be guaranteed. Trekking can take anywhere from 1 hour to 8 hours and it can be quite tiresome, so a reasonable level of fitness is required. No camera flashes and you avoid sustained eye contact or finger pointing. If a gorilla moves toward you, step calmly out of the way. If one charges, follow the guide’s instruction to drop to the ground in submission.

admin - December 2, 2017 0
No one will and can be a perfect traveler regardless of how well you prepare, but everyone’s dream is to have a memorable safari...

admin - January 22, 2018 0
The Batwa are a historically nomadic and forest-dwelling community of hunters and gatherers. They’re widely acknowledged to have been the first humans to live...

Discover The City By Bicycle

admin - June 16, 2022 0
When you reach the eastern horizon at dawn, the whole horizon floods all the plains with amber light. When you pick out the distinctive...