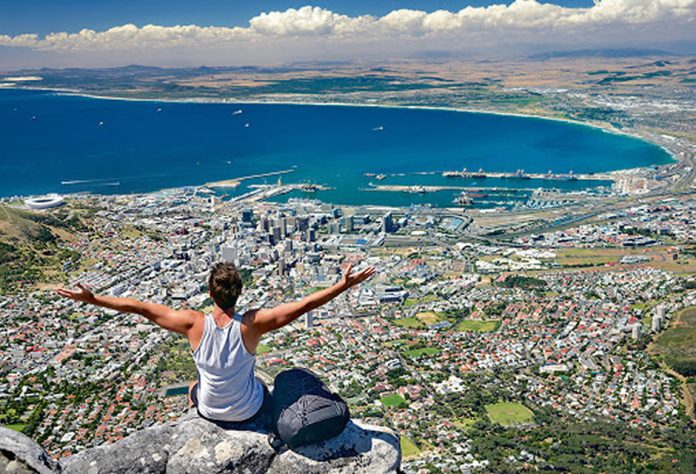 It’s been referred to as the San Francisco of South Africa and the “Mother City.” One thing is for sure: Cape Town pretty much has it all for the avid traveler! Located on South Africa’s southwestern coast, it’s the country’s second most populous city. From the sweeping vistas atop the iconic Table Mountain, to the infamous jail site of Nelson Mandela, Cape Town has a wide variety of natural beauty to explore and adventures to discover. Here’s a look at seven must do things while you’re visiting Cape Town…

Now it’s a UNESCO World Heritage Site but before that it’s where the country’s beloved Nelson Mandela was imprisoned for eighteen years. Once a political prisoner during South Africa’s brutal apartheid period, Mandela went on to become president of the country after he was released. Visitors to Robben Island can get a first-hand look at Mandela’s jail cell and learn about South Africa’s infamous history. The District Six Museum is also located on Robben Island and another great insight into the history of the prison and Cape Town.

TAKE IN THE VIEW FROM TABLE MOUNTAIN

This flat-topped mountain is the prominent landmark that reminds you that you’re in Cape Town. It’s part of the Table Mountain National Park, which offers some great hiking trails. If you’re feeling adventurous, you can make the two hour hike to the top of Table Mountain. There’s also a cable car option that goes to the top as well. Keep in mind though that it’s operating hours depends on the weather. Once at the top, you’ll be rewards with a bird’s eye view of Cape Town!

CHECK OUT THE AWESOME BEACHES

Cape Town has some great beaches, depending on what you’re in the mood for. For a more “upscale” beach experience, check out Camp’s Bay. This trendy beach town is where the “in crowd” like to be seen. There are many luxury dining and hotel options close to the beach. And the beach itself is also pretty picturesque.

Hout Bay is another beach option that offers up romantic sunsets and crisp, cool waters of the Atlantic. Boulder’s Beach offers the opportunity to penguin watch, and the Clifton Beaches offer plenty of soft sand and sunbathing. Keep in mind that South Africa does have a winter season, which typically starts in June. It can get pretty windy and chilly, so a trip to the beach may not be quite as fun in that kind of weather!

HEAD OVER TO LONG STREET

Checking out Long Street is a must during your Cape Town Visit. It’s lined with Victorian-era buildings with wrought-iron balconies and quite a historically beautifully sight. The oldest Mission church in South Africa is located on Long Street. You’ll also find the Palm Tree Mosque and the South African Mission Museum.

Those travelers into art can head for the city’s newest public art display at the Open House Cape Town. It’s also a great place to shop for unique items. Long Street is home to many antique shops, second-hand bookstores, and eclectic boutiques. You’ll also find plenty of bars and clubs lining the strip as well.

During the time of apartheid, the black population was separated from the white population. The black South Africans were moved into townships. Although once a symbol of the apartheid oppression, the townships are still home to poverty and crime due to lack of education and access to basic needs.

There are ways to visit these townships without feeling like you’re exploiting those who live there. Make sure to find a local guide, preferably one that knows the area and is trusted by the people. An organization called Uthando is a good option to look into. They offer township tours with the funds going to help the local people. And the experience alone is definitely life-changing!

TAKE A DRIVE TO CAPE PENINSULA

Either rent a car or book a tour that makes the drive to Cape Peninsula while you’re visiting South Africa. The sweeping landscapes during the drive alone are definitely worth it. Cape Peninsula is a rocky formation that juts out into the Atlantic Ocean. It’s also considered the southernmost point of the African continent. Cape Peninsula is a part of the Table Mountain National Park and a must see for its breathtaking natural beauty and its significance as a location. There’s a lot of wildlife to see including African penguins!

If you’re looking for a bit of history or just love museums in general, Cape Town’s Museum Mile may be just what you’re looking for. Here you’ll find an assortment of museums to check out. The National Gallery showcases South African art as well as classic works from around the world. The Iziko Planetarium is a must for those who love all things celestial. And the Iziko Slave Lodge is a testament to a time when slaves, convicts, and the mentally ill were all housed in the same building. There are plenty of museums to check out here, so give yourself plenty of time to explore!

admin - June 26, 2017 0
If you are thinking about going on a safari in an African game reserve or national park, you should take a quick read through...

admin - March 11, 2020 0
Seychelles is the tourist destination that is famous for its pricey accommodations of which a critical chain of stay is its resorts. The Seychelles...

Guide to Planning a Perfect Gorilla Safari on Budget

admin - January 14, 2018 0
You can enjoy wildlife, primate or a cultural safari as a family in Uganda or Rwanda. We have got many tips for a perfect...