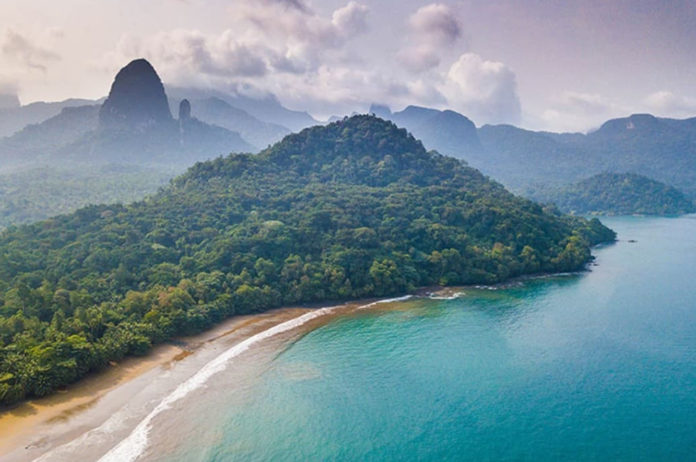 Lying in the northern island of the Sao Tome region, Principe is a beautiful locale situated on the western African coastline. With the best ambience of African vegetation, and spanning over an area of around 136 square kilometers, Principe is an island that has been formed out of heavily eroded volcano of around 3 million years back. It is surrounded by many other fascinating islands which include the Ilheu Bom BOm, the Tinghosa Grande, Ilheu Caroco, and the Tinhosa Pequena.

Principe is filled with thick forests which are part of the Obo National park. This island actually had a lot of plantations earlier most of them being planted by the Portuguese colonialists who used to exhort slave labour. Initially a sugar producing region, Principe then became the greatest producer of cocoa.

This is the place where Einsteins’ theory of Relativity was proved to be a successful idea by Arthur Stanley Eddington during the time there was a solar eclipse in the year 1919.

This is the main region of Principe and was the colony’s capital from the year 1753 to the year 1852. Lying on the north coast it has the River Palhota near. It is the capital of the districts of Pague District and the Principe Province. Colonial architecture is at its best here and Santo Antonio is known for its churches with the Roman Catholic Church as the largest one. Then you have the Auto de Floripes play her which is a play done by the citizens and is watched by an audience coming from across the world.

Then Principe has some of the most beautiful villages like the Bombom, the Bela Vista, the Neves Ferreria, Ribeira, Paciencia, Santo Antonio de Ureca and the Ribeira Ize.

This is the second largest city in the region of Principe and Sao Tome and is the capital city of Sao Tome. This is actually a separate island from Principe. Situated in the Guinea Bay in the Central African region, this is a plethora of African culture and Portuguese traditions.

The wildlife in Principe is predominantly not really with a great diversity of species and includes those who have come to this island from the sea. Principe lies very close to the African mainland and is the smaller of the two islands of Principe. With the most mountainous regions, the highest peaks here reach to around 2,024 metres at the Pico de Sao tome. Then there is the Pico do Principe which is at a height of 948 meters.

With only one endemic terrestrial animal, the Sao Tome Shrew, there are some bats which dominate the region of Principe and Sao Tome. Then you have the Humpback Whale and also the Mona Monkey, feral pigs and rats. More than 114 bird species have been seen here and it is a wonder that the largest sea bird colonies are found here in the land of Principe wildlife zones.

Plant life also thrives in Principe and you have at least 37 of the vascular plants of the region here in Principe. With rich ferns and dense rainforests, wildlife in Principe is surely a treat for the nature enthusiast.

Thus the Principe island situated in the equatorial region of the Atlantic ocean around 250 kilometers off the Gabon coast makes up a part of the smallest African country. Though visited by very few tourists yet it is a pristine land for those who make it. These laid back islands with the palm trees with the fantastically clear crystal waters of the ocean make it a perfect paradise for the wildlife lover. Besides the unexplored jungle locales and the Portuguese Creole topped paradise with the best coffee plantations make a visit to Principe very memorable.

admin - January 25, 2022 0
Bamenda is a lovely city in the northwestern part of Cameroon and offers greatest tour pleasures. Also known as Mankon and Abakwas , this...

admin - February 21, 2017 0
The new common language will be more simple and regular than the existing European languages. It will be as simple as Occidental. A small...