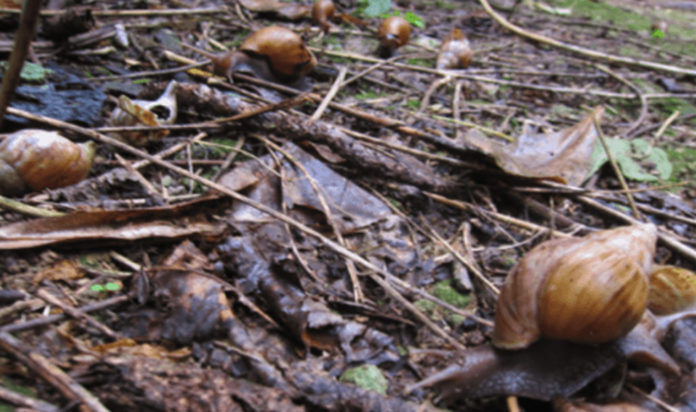 The giant African land snail is seen as an invasive species throughout much of the tropics, but is it really so bad?

The giant African land snail is a poster child of a global epidemic: the threat of invasive species. The snails are native to coastal East Africa but are now found across Asia, the Pacific and the Americas – in fact, almost all tropical mainlands and islands except mainland Australia.

Yet, despite their fearsome reputation, our research on Christmas Island’s invasive snail population suggests the risk they pose to native ecosystems has been greatly exaggerated.

Giant African land snails certainly have the classic characteristics of a successful invader: they can thrive in lots of different places; survive on a broad diet; reach reproductive age quickly, and produce more than 1,000 eggs in a lifetime. Add it all together and you have a species recognized as among the worst invaders in the world.

The snails can eat hundreds of plant species, including vegetable crops (and even calcium-rich plaster and stucco), and have been described as a major threat to agriculture.

They have been intercepted at Australian ports, and the Department of Primary Industries concurs that the snails are a “serious threat”.

Despite all this, there have been no dedicated studies of their environmental impact. Some researchers suggest the risk to agriculture has been exaggerated from accounts of damage in gardens. There are no accounts of giant African land snails destroying natural ecosystems.

In research recently published in the Journal Austral Ecology, we tested these assumptions by investigating giant African land snails living in the native rain forest on Christmas Island.

Giant African land snails have spread through Christmas Island with the help of another invasive species: the yellow crazy ant.

Until these ants showed up, abundant native red land crabs ate the giant snails before they could gain a foothold in the rain forest. Unfortunately, yellow crazy ants have completely exterminated the crabs in some parts of the island, allowing the snails to flourish.

We predicted that the snails, which eat a broad range of food, would have a significant impact on leaf litter and seedling survival.

Unexpectedly, the snails we observed on Christmas Island confined themselves to eating small amounts of leaf litter. Author provided

However, our evidence didn’t support this at all. Using several different approaches – including a field experiment, lab experiment and observational study – we found giant African land snails were pretty much just eating a few dead leaves and little else.

We almost couldn’t distinguish between leaf litter removal by the snails compared to natural decomposition. They were eating leaf litter, but not a lot of it.

We saw almost no impact on seedling survival, and the snails were almost never seen eating live foliage. In one lab trial, we attempted to feed snails an exclusive diet of fresh leaves, but so many of these snails died that we had to cut the experiment short. Perhaps common Christmas Island plants just aren’t palatable.

It’s possible that the giant African land snails are causing other problems on Christmas Island. In Florida, for example, they carry parasites that are a risk to human health. But for the key ecological processes we investigated, the snails do not create the kind of disturbance we would assume from their large numbers.

We effectively excluded snails from an area by lining a fence with copper tape.

The assumption that giant African land snails are dangerous to native plants and agriculture comes from an overriding sentiment that invasive species are damaging and must be controlled.

Do we have good data on the ecological impact of all invasive species? Of course not. Should we still try to control all abundant invasive species even if we don’t have evidence they are causing harm? That’s a more difficult question.

The precautionary principle drives much of the thinking behind the management of invasive species, including the giant African land snail. The cost of doing nothing is potentially very high, so it’s safest to assume invasive species are having an effect (especially when they exist in high numbers).

But we should also be working hard to test these assumptions. Proper monitoring and experiments give us a true picture of the risks of action (or inaction).

In reality, the giant African land snail is more the poster child of our own knee-jerk reaction to abundant invaders.

Gorilla Trekking: Everything You Need to Know

admin - February 22, 2017 0
The new common language will be more simple and regular than the existing European languages. It will be as simple as Occidental Lorem ipsum dolor...