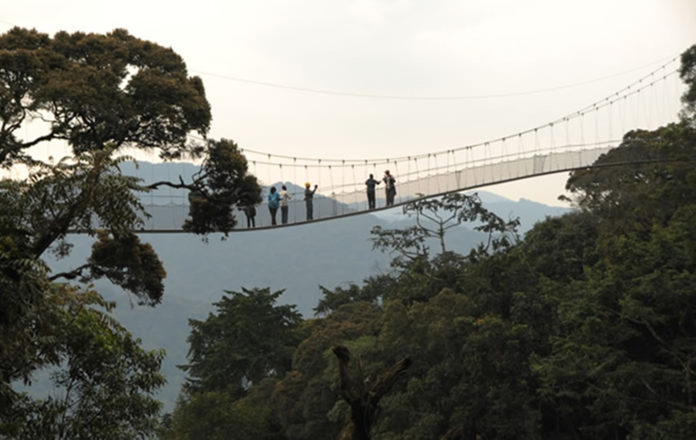 Nyungwe Canopy Walk is approximately a two km walk to and from. The actual canopy walk is around 170 meters. Canopy walk starts with briefing by one of the guides at the park headquarters and then you proceed to the forest. There is a lot to see on this walk which includes several primates and birds plus many tree species. When you eventually reach the real starting point, you then start your hike on a trail hanging and connecting one hill to another. It is true that on canopy walk tour, you get to see several birds and other attractions like tree canopies, primates and so on.

Walking on ropes and aluminum bars way high up there is so challenging that when clients complete this walk, they cerebrate so much. While on this canopy walk, you are advised not to look down as you may instead become scared. All you need to do is concentrate, look forward and remain focused to complete the walk. Nyungwe canopy walk is such an experience so unique and is next to trekking gorillas if you have the guts to do it.

Visit Kigali Museum and learn the history of city and country’s pre-colonial and colonial period as well as the colonial masters in Rwanda.

Visit the Genocide Memorial site, a grim reminder of a senseless massacre of innocent’s lives in 1994. Learn about Rwanda’s history from pre-colonial times to 1994 genocide and how Rwanda has dealt with that past. We continue with our tour and see the new developments in Rwanda; the recovery has been incredible, a testament to humankind’s resilience.

Visit the Kimoronko Giant Market, the hand art and craft market of CAPLAKI and later we drop you on your destination in Kigali.

The Akagera National Park is situated north east of Rwanda along the border with Tanzania. The game drive here are like opening a present and each game drive holds a full new surprise as nature reveals its treasures in form of wonders that are so scenic, the wildlife like buffalos, antelopes including; the elands, topis, Maasai girafffes, monkeys, savannah birds, civets, leopards, the hyenas, as well as the serval cats among others.

10 Magical Things to See & Do in East Africa

admin - August 16, 2022 0
If there is something the African continent was blessed with, its plenty of everything beautiful. Every country on this continent has something worth exploring,...

admin - January 30, 2018 0
Many safari activities are done in Rwanda but the gorilla tracking activity is incomparable! This rare wildlife experience that is conducted in the Volcanoes...

admin - November 30, 2017 0
The remote areas of Bwindi Impenetrable National Park in southwestern Uganda and the Virunga Massif have one of the wildlife treasures on the African...